That was the most (and perhaps only) exciting thing about our new house for me after we were told that we had two months to find a different place to live. Our previous house was a rental and owned by a company and it was a “business decision” to sell instead of lease the home after we had lived there for two years. We loved that home and the memories we made there with cherished friends and family.

However, as we finally got unpacked in the new place and I could exhale from school a bit, we became incredibly grateful for the huge backyard with fruit trees and plenty of room for the large garden I had dreamed of. The kids were thrilled too, as they loved to collect seeds and were fascinated by the ways in which things grow with a little water.

Or so we thought.

We dug the ground, pulled out the weeds, and fertilized the soil. After two books on gardening and composting along with the experience and knowledge my husband and I had gained in Uganda, we were confident in our creation and our abilities. With sweat and blisters, we made the rows, the raised beds, and followed the guidelines for each vegetable. It looked great in the beginning: fertile and ready to bloom into something that would show the beauty and mystery of life.

This search for a new beginning, for growth, to be alive, was also happening on a deeper level for me, though I’ve only recently gained this level of awareness. In psychology, this is similar to what we call a parallel process: the struggles we are having internally, in another area, or on the level of our psyche or subconscious, come out in a separate context or in a seemingly unrelated situation. Thus, the garden became a fully embodied parallel process for me and though the metaphorical language does not do justice for my emotional experience, it nevertheless seems congruent in meaningful and very real ways.

The thing is, I needed to plant seeds–to start fresh with something that would produce good fruit. The ground was dry and hard, with soil not suitable to drain well and nourish any roots. No signs of full life were visible. Something felt dead inside of me as well I guess. Maybe it still does. Perhaps there is always a part of us that is seeking to be brought to life for the first time, or resurrected, or awakened. The move was just a symbol of a greater shift within me, one that is still taking place.

The transformation from dry, untouched dust to moist, massaged, formed, and nourished soil was sure to bring life. I watered it daily, ever so careful as not to wash the seeds away. It was a delicate process the first several weeks, and one in which I found great joy through the expectation of new life. As the sun slowly crept up, so did I. The garden was peaceful, so calm and quiet with just the birds in the trees to keep me company. There is a stillness outside in the morning, a silence that somehow sings gently to me and calms fear.

Out of what? A tiny, hard, seemingly dead seed and the ground birthed baby green plants. From the death of the old plant, from a fruit that had nothing but a seed to pass on, new life arose. 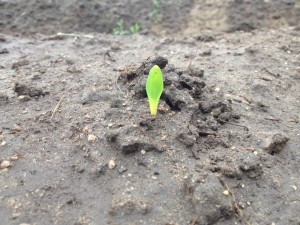 Death was present in my garden as well, a consistent guest actually. Because as life grew within the garden and within me, plants were dying…hopes and expectations fading away. Fertilizer made from old, rotten produce was commonly worked into the soil. Death happened for the countless gnats and mosquitos that would attack as I watered in the evening. I’d smash them as they sought life from my blood or whatever else they needed to live. And ANTS. It wasn’t long before we saw hundreds of ants, all in rows, moving the seeds. Thieves!! They worked so hard to carry away the tomato and carrot seeds, scurrying into their holes only to leave me frustrated and speechless. Those were my seeds! That life was mine.

And so I became an exterminator. All organic of course! (so as not to negatively affect human life right?) Baking soda, coffee grounds, dish soap, mixes of spices, vinegar…many methods utilized to somehow end the lives of those pesky, tiny things that were ruining my pursuit of life. The ants were relentless, as was I. A daily battle ensued. And it felt hopeless at times. The more I fought, the more creative and persistent I became, the more they did as well.

What is it about this fight for life? Why, I thought, isn’t there enough to go around?

We have a dozen fruit trees and a compost pile. Plenty of rotten fruit on the ground to feed thousands of ants.

Plenty of ways to seek life in our world, how is it that I could still feel death in my own being?

Birds also attacked, taking not the seed, but the entire baby plant after it grew. And the sun….apparently the “when to plant” tips are very important. You plant things in July in southern California, the sun is sure to scorch the life right out of them. In a matter of hours, cornstalks went from green to brown. The carrots that were replanted refused to even sprout. Too dry, too hot. Lessons learned.

And I wish I had a happy ending to share. At the end of November, the weather had finally gotten cool enough to stop my efforts with the garden. And the result of my countless hours? The fruits of our labor? A few watermelons, corn that was almost got big enough to eat, and some pumpkins.

Much more death that life.

It was enough to make anyone go completely crazy. To see the green plants sprout, to see incredible vines grow, and then to watch them wither or produce very little fruit. At times I would find myself watering a dead plant, hoping to revitalize it.
As I gave up on the pumpkins turning orange in time for any holiday in which one might reasonably want orange pumpkins, I found myself reflecting on what I had done wrong. And I’m sure there are some very important ways in which I can improve as a gardener for next year.

Yet, at the end of that season and now as a new spring approaches, I cannot help but accept that death and life must exist together. There is simply no way to avoid it. Whether it is at the mercy of the sun or my hands picking the fruit, some life will cease. And some will begin or continue. This of course, is the great circle of life that we’ve learned about since grade school.

But here’s my confession: I’m not okay with it. I had always prided myself on the idea that I like change. That I do well with change and that I am okay with some endings and exciting new beginnings. That death is just a gateway, with no real power to cause a true ending.

But I hate death and I hate endings. Whether it’s the death of a loved one’s life, or a deeply meaningful relationship, or that damn plant that will not keep fighting: there are some things that I deeply want to be sustainable and permanent. I fight for that to be the truth. And many optimistic people would answer that there are indeed these things. Faith, love, and hope: these are eternal. And there’s a part of me that completely agrees. Life still wins. It still shines brighter and I know at my greatest depths that life will be all that remains in the end. Death will have its say, and then life will have the last word.

However, as I approach a very difficult decision and the realization that within the next year there will be great losses, I grieve deeply. Metaphorically speaking, there will be the death of something meaningful and incredible valuable to me. There will be change and there will be death. Yes, they will have a say.

But I suppose that we also have a say. For perhaps the greatest source of life that I have discovered is that I yearn. I ache. And I long to respond to death, which is a great sign of a living power that is sustainable. It is everlasting through the way we live and the relationships we build. In the earth we pass on and the stories we share.

I may not get a chance to plant that same garden at the same house, but I will plant a garden. I will sow seeds and they will bring life. They already have. And that power, that force and energy that gives us the chance to live and move and have a being, even if only for brief moments, will never fade. 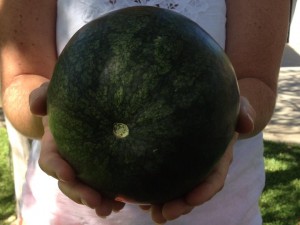